Off Season Tip for the Pitti Palace 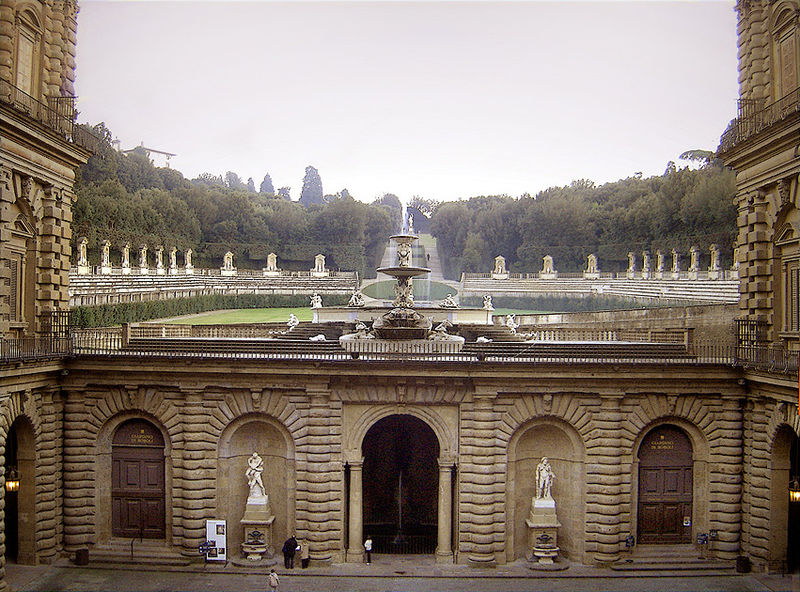 The Pitti Palace in Florence Italy was built by Lucca Pitti. He was a rich banker and lived there with his family from 1470 and on ward. The building was meant to look like a palace from the start this due to the competition between the Pitti family and the Medici family who was the ruling family at the time in Florence. He wanted his residence to be even more imposing than that of the Medici Palace.

His Pitti Palace was set back from the street and has an enormous open square in front of the building. This makes the Pitti Palace look even more noticeable and impressive than it really is, not that it wasn’t a beautiful piece of architecture.

The fortunes of the Pitti family didn’t last and in a cruel twist of fate, the Pitti family lost their prized palace to the very family they were competing against, the Medici’s. They obtained ownership in 1550 only 80 years after it was built for the Pittis. So sad.

Under the ownership of the Medici family they increased the size tremendously to twice its original size. It became the most majestic Pitti Palace in all of Florence and the surrounding area. It is today as it was then and awe inspiring piece of architecture. When you leave the main part of the city of Florence going over the Ponte Vecchio, it looms large on the left side once you cross the ArnoRiver and head into the otrarno section of Florence.

The Pitti Palace has been lived in by the Grand Dukes of Tuscany and was used by the great Napoleon when he was staying in Florence during his rule over Italy. It was also used as the home to King Vittorio Emmanuel II when Florence was the capital of Italy. And then Leopold II, the last Grand Duke of Tuscany opened it as a museum in 1833. It has had a long and storied history.

The entire valuable article that the past owner had collected while living there are part of the museum which makes up the museum today.

If you go and buy a ticket to see the Palatine Gallery you also get entrance in to the Museum of Modern Art. There are more than 500 works of art that make up the Palatine Gallery in the Pitti Palace. The art work is arranged in the palace gallery as if it were still in the private collection of the families that previously lived there. It is the intent to hang the artwork in the same manner as it was in the past when the Grand Dukes were living in the Palace. Nothing is roped off and you are not kept at a distance from them, get up close or admire from a distance. It’s all up to you. The real problem in the palace is that there is so much to see at times you are a bit overwhelmed.

Most of the artwork is of the Florentine School of Art and from the Baroque period dating back to the 16th and 17th centuries. You can see such masters as Raffaello, Tintoretto, Caravggio, Botticelli, and the portrait painter of the time Bronzino(not the fish) Titian, Ghirlandaio and many more. There are also artists from other countries such as the Spanish painter Velazqquez and the Flemish master Rubens and Vandyk. Most of the work in the gallery if of a religious theme. But many are also portraits of the patrons of the times. Yet others show Greek and roman mythology or real life battle in war.

There are so many paintings that they go from floor to ceiling in some rooms and the rooms have very high ceilings, don’t hurt your neck looking up all the time. Each painting has a card with information about who painted it and when and who it is about. A complete history of the art you see on the walls. So you don’t have to know art to appreciate it. It’s there for all to enjoy