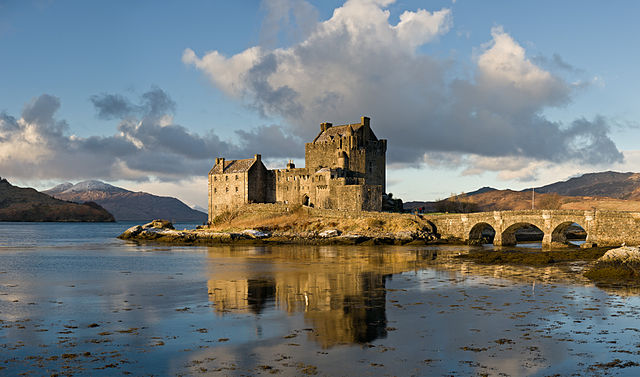 The popularity of Eilean Donan Castle began after its frequent appearance in James Bond movies. But there is more to it than what meets your eye on the screen. The Castle is situated in Loch Duich on the west coast of Scotland near Isle of Skye. The Name of the castle has a history dated back to the 7th Century, when an Irish pope – Saint Donan formed a community in that island.

The Castle was originally built in the 13th Century as a defense area. There is also a history of execution of 50 men here. In the 17th/18th century, the castle was destroyed by the English Government. From that date on to 1912, the castle was in ruins. It was then bought by Lt Colonel John Macrae-Gilstrap. He started to rebuild the castle according to its old specification for 20 years and finally completed the work in 1932. The castle we see now is the work completed in 1932. What to Expect Inside the Castle

There is an ornate gate through which you would have to pass through and walk along the stone causeway that leads to the castle. After passing through a gateway, there is a funnel shaped courtyard before reaching the main castle.

Magnificently arranged exhibits would welcome you taking through the history of the castle over the centuries. The stone steps laid further would take you to the main rooms of the castle. The Billeting Room has lots of paintings and weapons.

The next is the Banqueting hall which displays flags, portraits and the fascinating gates. It is said that the gate was used to cover a well which couldn’t be contaminated or poisoned during the 18th century. There is also a portrait of Lt. Col. John Macrae-Gilstrap that would amuse you. His left leg will point to you wherever you are in the room and his eyes would seem to follow you.

When you climb the staircase from the Banqueting hall, you will reach the upper floor where there are six bedrooms.

There is also a kitchen in the palace. This is a recently made one. There are paintings that portray the cook, butler and the lady of the house. There are even kitchen noises when you arrive there. The tour ends with walking around the battlements and seeing the old portcullis. You can even opt to walk around the perimeter of the castle and go down to the rocks to see the castle from outside.

The castle is famous for the appearance of an eerie Spanish soldier who died during the castle’s destruction. The apparition of Lady Mary was also seen many times in one of the bedrooms of the castle.

This is one place where the three great sea lochs converge and has mesmerizing mountain scenery. Whether you want to get married, or renew your vows, this castle is a great place for a ‘Highland Wedding’. Especially the Banquet hall is a charming place. Accommodation and Food are available in the nearby village of Dornie. To name a few, you could stay in the Schoolhouse, woodlands, Glomach house, Croft Cottage, Glenview Cottage and cottages in Kintail and Lochalsh. They all have good scenic views.